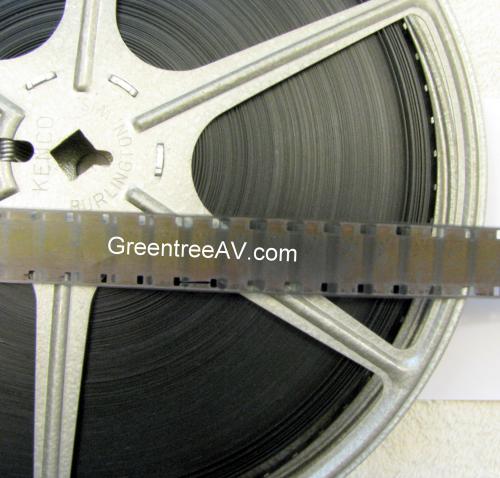 16 mm movie film is 16 mm wide and has a ¼ inch square hole in the center of the reel.  16 mm B&W film was introduced in 1923 by Kodak on an acetate (safety) base for amateur use.  Kodacolor color reversal film was introduced in 1928.  16 mm film can have sprocket holes along both edges (no sound) or sprocket holes along one edge and may have optical or magnetic sound along the non-perforated edge.  Optical sound-on-film was in use by 1932 and was incorporated into Kodachrome (1935).  Optical-film has a ‘wavy’ optical stripe along the non-perforated edge of the film that is part of the photographic emulsion and sound is generated by passing light through the optical stripe.  Optical film is best used when many copies of the film will be made.  Magnetic sound-on-film had its practical beginning in 1948.  Magnetic sound has a magnetic stripe along the non-perforated edge of the film and sound is generated by electrical amplification methods.  Magnetic sound is suited for one-time use such as home movies and TV news reporting; it has less background noise and better sound quality than optical sound.  The 16 mm image frame size is 10.26 x 7.49 mm with an area of 76.85 mm2 and the film runs at 18 or 24 fps; sound film normally runs at 24 fps.